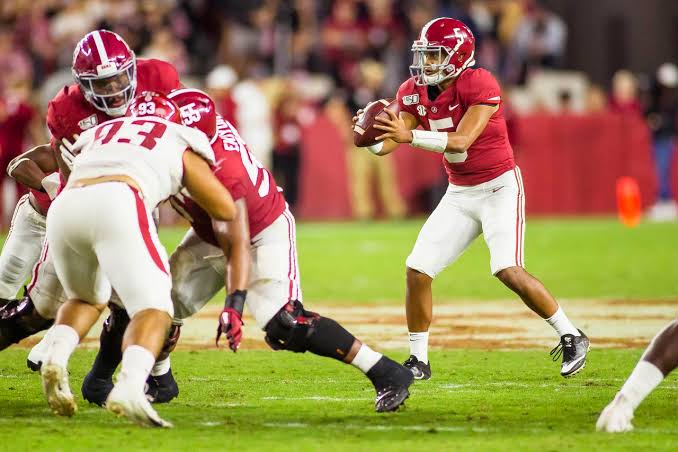 There will be a Taulia Tagovailoa playing quarterback on Saturday for Alabama.

With Tua Tagovailoa out for the remains of the season, the Crimson Tide’s arrangement has changed for Tua’s younger sibling, freshman quarterback Taulia Tagovailoa.

Alabama had been intending to redshirt Taulia. Not any longer.

Taulia is the group’s new reinforcement quarterback and he’s set to make some playtime against Western Carolina this end of the week.

“We’re gonna play him this week in this game some kind of way regardless of how the game goes to try to get him some experience, some playing time and hopefully some confidence,” head coach Nick Saban said. “When we had the unfortunate injury last week to Tua, that kind of negated the opportunity to be able to redshirt to Taulia.”

Taulia played in four games as the third quarterback behind his sibling and Mac Jones and enters this end of week 7 for 9 for 65 yards.

His most broad playing time arrived behind schedule in Alabama’s success over Arkansas Oct. 26, when the previous four-star recruit finished 6 of 8 passes for 45 yards.

He’ll likely get more chances to throw on Saturday, however.

“With him being now the backup quarterback, we thought we needed to play him,” Saban said, “because if something happens to this quarterback, Mac Jones, he’s going to be the guy that’s got to go in the game and try to win the game for us.”