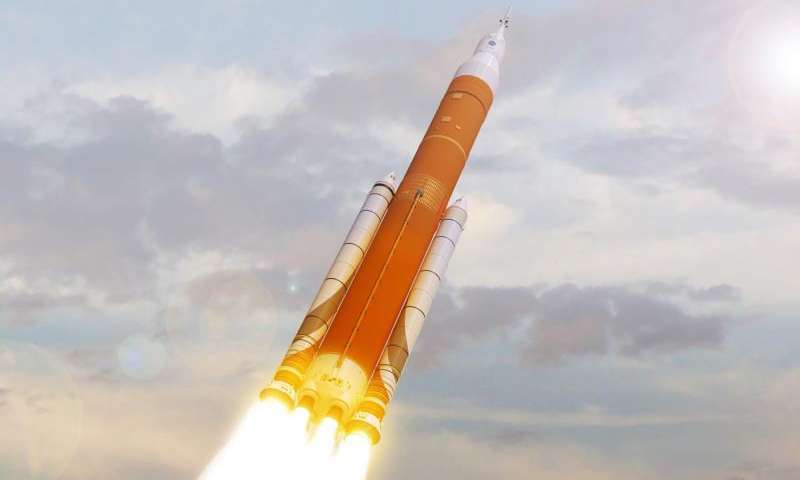 The rocket which will return Americans to the Moon is presently set up for a key testing stage. Known as “Green Run,” this series of tests will analyze a large number of the rocket’s systems together for the first time in preparation for launch.

Presently secured to a test remain at Stennis Space Center in Mississippi, the full Green Run for Space Launch System (SLS) will last around two months.

“This critical test series will demonstrate the rocket’s core stage propulsion system is ready for launch on missions to deep space,” Stennis Director Rick Gilbrech said. “The countdown to this nation’s next great era of space exploration is moving ahead.”

Created by Boeing in Huntsville, and controlled by four Aerojet Rocketdyne RS-25 engines, SLS is the most dominant rocket at any point fabricated. It stands 212 feet high and 27.6 feet in diameter.

“Delivering the Space Launch System rocket core stage to Stennis for testing is an epic historical milestone,” said SLS stages manager Julie Bassler. “My team looks forward to bringing this flight hardware to life and conducting this vital test that will demonstrate the ability to provide 2 million pounds of thrust to send the Artemis I mission to space.”

The Green Run culminates with an eight-minute, full-duration hot fire of the stage’s four RS-25 engines to reproduce the 2 million pounds of thrust required at launch.

When the Green Run is finished, whenever the RS-25 engines fire up will be at launch from the Kennedy Space Center in Florida.

Before the rocket arrived in Mississippi, Boeing SLS VP and program supervisor John Shannon noticed that the engine tests at Stennis will uncover much more data about the vehicle’s systems.

“The next big unknown for the program is when we put together the cryogenic liquids and oxygen tank and hydrogen tank and we look at the plumbing and all the systems and make sure they remain tight and perform as expected,” Shannon outlined. “We have high confidence that they will.”

When the next round of tests finishes up, the rockets are repaired before the 10-12 day trip to Florida.

Shannon assessed that repair will fundamentally include inspections. He expressed that in “a high vibration, high acoustic environment,” the question for colleagues becomes “did we break anything?” He referred to thermal protection fixes as something that should be done because the fuel tank contracts when cold cryogenics are stacked in it, at that point grows again as it warms back up.

“By the time we take this vehicle to Kennedy Space Center it will be an extremely well-understood vehicle and we’ll have high confidence in flying it,” Shannon concluded.